Post-election policy debates concerning the future of the Affordable Care Act focus heavily on the 20 million people who gained health insurance coverage under the law. But the future of less-visible components of the law – especially its population health provisions – may be equally important to the nation’s long-run health and economic wellbeing. Which provisions should be scaled up or down as U.S. policymakers revisit health reform over the next four years?

The ACA stimulated a surge of new interest in the science and practice of improving population health. The aim of this work is to improve health status for large groups of people and entire communities, rather than doing so one patient at a time through an expensive and fragmented medical care system. This work includes upstream strategies for keeping people healthy in order to reduce the flow of patients into the medical system with preventable health conditions. The ACA established population health improvement as a central component of the Triple Aim strategy on which many of the law’s payment and delivery system reforms are based. Since then, hospitals, health systems, insurers, pharmaceutical manufacturers, information technology companies and large employers have created new organizational units devoted to population health. And public health professionals and preventive medicine specialists also claim large swaths of territory in the population health frontier. 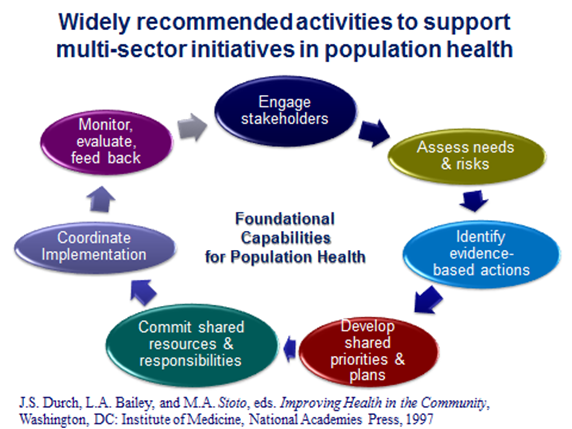